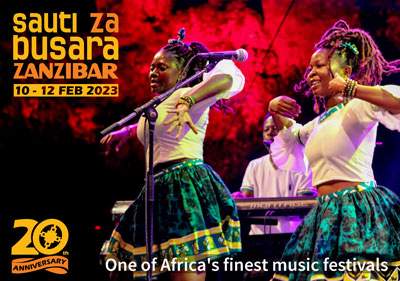 Sauti za Busara festival [Swahili, Sounds of Wisdom] is ‘one of Africa’s best
and most respected music events’ (BBC). Uniting African music fans across
the world, the 20th edition will be centred in Stone Town, Zanzibar during 10 – 12 February 2023, featuring unique and high quality performances, collaborations, networking for professionals and more.
The line-up of confirmed artists will be announced in October 2022.
Special ticket prices are available for Tanzanian citizens, EAC residents and African passport-holders, with Supersaver discounts for all bookings before 31st October 2022.
#SzB2023 #kubwakuliko @sautizabusara

The business of festivals’ not music to the ears of organisers

When Busara Promotions, the organisers of the Sauti za Busara International Music Festival, Zanzibar’s premier music festival, announced on March 23 that this year’s edition of the annual extravaganza was to be the last for a lack of funding, it was proof of the financial burden of organising music and other festivals in the region, where long-term local financing is hard to come by across all sectors … read more

Pennyroyal Limited, the developers of Blue Amber Zanzibar and Busara Promotions on Tuesday, March 29 signed a three-year sponsorship deal that will see the festival’s continuity and sustainability. The sponsorship which is set to take care of the festival’s operational cost is worth some $120,000 annually and will be issued on a quarterly basis. And with the assurance of core funding, the festival has announced the dates for the 2023 festival which is set to take place from February 9 to 12 … read more

The 19th edition of Sauti za Busara has been held in Zanzibar with a specific focus on fostering women in music.

The 19th edition of Sauti za Busara, one of Africa’s finest music festivals reached its peak at the weekend with a taste of Singeli – Tanzania’s music melody – and a message of hope from the government for the continuity of the extravaganza …read more